""Whatever," I said. "The point is, if it's a child small enough to throw, then she lost so much blood here she has to be dead."

"Then assuming she's average size, I don't think we want to try and catch somebody who could throw her that hard. If you shoot him, he might get very annoyed and pull off your arms."" 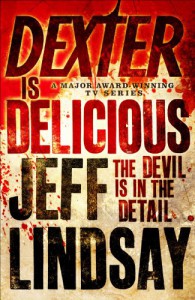 See, this is the humour in the books that I love that largely seems missing in the later seasons of the show!