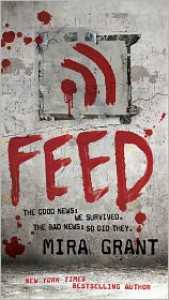 Well, hello there my fellow bibliophiles!I just want to make a confession at the head of this review. I am a zombie fan. I have been ever since I was 8 years old and watched George Romero’s seminal 1960’s classic Night of the Living Dead. I firmly believe that Romero’s flicks are not just trashy horror flicks but the ultimate in zombie survival plans.Now imagine my shock when I hear about a novel series that has been doing the rounds of the YA circuit (although I’m not entirely certain that YA applies to it so far) that actually seems to believe this too. Remember my thoughts of Alice in Zombieland? No? How about The Reapers are the Angels? Well I recommend you click the links and read those reviews, then carry on with this one. You will see that I am not one of the people who thinks that zombies have been done well in recent popular fiction that young people have been reading.So I picked up the first instalment for $5 when a local bookseller was tragically closing down. And after AiZ had killed my hunger for zombies in novels it sat there collecting dust for several months and a house move. Then on Valentines Day, I picked it up. What? Yes I picked it up on Valentines, what else am I meant to do when my significant other is at work?I picked it up… and I devoured it. These zombies weren’t over bearing, there was no cliché war cry of “Braaaaaaaaains”, there were no overdone feeding scenes. The zombies here were a part of the world in which this yarn was set.This is a story that happens to be about bloggers. And in this almost dystopian future, bloggers are the first and most reliable line of current event reporting in the world. Now we start following two 20-something bloggers, Shaun and Georgia Mason, as they are selected to be the first bloggers in history to follow a US presidential campaign. And that was it, from this I was sold. I twigged then that this would be a political conspiracy story… with zombies… and I was not disappointed.But now, for a little backstory. The year is 2039 and 25 years earlier, in 2014, the dead started to get back up and munch on their loved ones. And the best thing about this concept? The cause was unforeseen complications when the cure for cancer and the cure for the common cold met and did what viruses do… mutated and adapted. Cue the zombies.How awesome does that concept sound? Seriously? I was sold straight away. And the writing had me hooked. It was simple and elegant in its simplicity. It drew me on and got its hooks under my skin. I read this book in a little over a day, but only because I had to, reluctantly, put it down and do life stuff. But along with the life stuff I went out and bought the second and third book in the series.This book was truly, astoundingly, awesome. It was emotional as fuck. There is a lot of good narrative, peppered with high octane action sequences, Some truly chilling science fictional horror… and fuck, it made me shed tears. And that isn’t easy to do. I didn’t even fucking cry during Marley and Me. Fucking Mira Grant can write… I swear to Buddy Christ.I was initially sceptical of this. I had seen myriad positive reviews, and all of the negative reviews I had seen came from people who weren’t fans of the shambling, hungry dead in pop culture. I’d had this trilogy recommended to me by more people than I care to remember, both online and off. And now I have but one question for myself… What the fuck took me so long? Why the fuck did I not devour this book like a mob of zombies happening across Rick Grimes strapped to table with an Eat Me sign?I have no answer. I honestly do not. I am kicking myself for denying myself from a work that has led to a weeklong book high for me. If you are a fan of zombies, either in film or literature, I whole-heartedly recommend giving this a go. If you aren’t a fan then I would still say give it a go, because the zombocalypse is just a backdrop to an immaculately crafted political conspiracy story. There is strong language and there is violence, so it’s not really one for the kiddies… much like my reviews… but it is well worth checking out.Happy reading,Archer.
Tweet