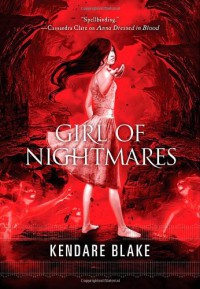 3.5 STARS!Hey hey, and wel­come to…The Mighty King­dom of Spoil­ers… YOU ARE THUSLY WARNED!Now you may remem­ber that I read Anna Dressed in Blood in the not too dis­tant past. And now I am here to spin you a yarn of lost love (of the deceased), horror-ish, and mys­tic druidic orders.I am of course talk­ing about Anna’s return in Girl of Night­mares. So lets take a look at this. In the last book Anna sac­ri­ficed her­self to destroy the Obeah­man and save the day… And now it’s 4 months later, Cas is up, walk­ing around and still whin­ing and not a lot else seems to have actu­ally happened.This leads me to my first prob­lem with this book. The severe case of sec­ond book syn­drome. This reads less like a sequel and more like a lot of padding before the ulti­mately obvi­ous end­ing. But I actu­ally enjoyed it. It was a very easy read, that burned away all too quickly. I just tire of all the self absorbed ‘woe is me, life with­out Anna is unbear­able’ bollocks.As this book starts, Cas seems to be stag­nat­ing to me. He is very much stuck in a rut. He’s still in Thun­der Bay, he’s still going to school, and he’s still spend­ing his free time hunt­ing the dead. Except now he’s that focused on the events of four months ago, and that is putting oth­ers at risk. Which, y’know, is not cool. So this sets up the book, a trav­el­ling tale of 3 young adults and a knife.The writ­ing remains at the very close to adult end of YA, lots of cussing, lots of vio­lence, lots of creep and some hell dimen­sions. But inter­spersed with all of this is a lot of sar­casm and dark humour that pre­serves the eerie atmos­pheric tone of the novel. Despite the lots of lit­tle things that irked me about the book though, there were a lot of ideas that I quite liked. The nod to the old joke that every pub in Scot­land is haunted, hav­ing been there a few times all the pubs I went to were reputed to be. The sui­cide for­est, this is actu­ally a very British Urban Myth and I heard a lot of vari­a­tions on it grow­ing up.But all of the padding that led to the con­clu­sion, in my mind was unnec­es­sary. It just felt like a bit of a cash in. Don’t get me wrong, I want to read more of Cas’s sto­ries, even if he is whiny and self absorbed and obsessed with a dead girl, BUT he is like­able enough, in the way that the Win­ches­ters of Super­nat­ural are lik­able to be honest.But the fact remains that I wanted this to be more. I wanted it to be the next level in YA hor­ror. I wanted it to push some bound­aries and to be… I don’t know just more, bet­ter, stronger… and it wasn’t. But it was still an enjoy­able read despite all of my griz­zling and grum­bling about it. I’d still read both books again and I would rec­om­mend them… Not for every­one but I would def­i­nitely give it a nod as prob­a­bly the best YA Hor­ror mini-series that I have read.Happy read­ing.Archer
Tweet