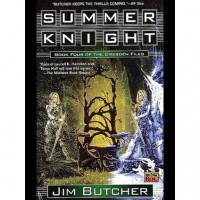 "Lord, what fools these mortals be."Is there any better way to end a fairy novel, than a quote from good old Bill Shakespeare?*REVIEW TIME*Well, hello there once again fellow book-o-philiacs.I have been remiss with my reviewing of late for a number of reasons. I’ve been stuck in a rut, I’ve not been reading things that I really wanted to be reading and mostly… I was sick of reading books that were so dull that they didn’t hook me. That my interest couldn’t be piqued by any of their mediocre attempts to reinvent a concept *cough*AliceinZombieland*cough* So I went back to my kindle, in a state where I was very much to give up on everything. Gaming, reading, movies, cooking, music… everythng. I’d had enough. And I found myself thinking fuck it. There are gems out there, there are books, games, films, bands, food that excite me still but I need to recharge. I need to breathe. I need to read something that, to me, epitomises everything I want the sub-genre of Urban Fantasy to be. I turned to Dresden.I looked towards Jim Butcher and I mentally beseeched his work to not fail me. And it didn’t. I picked up Project Dresden from where I left off. With Summer Knight, book 4 of the series so far. And I swear to you it was like having a conversation with a best friend after time apart. Nothing was difficult and it was a lot of fun. Before this we had seen Harry face one of his most difficult challenges to date. Losing the woman he loves.I honestly don’t know how I’d deal with something like that. It’d kill me to lose my fiancée. Anyway, now we are nearly a year later and Harry is doing his best hobo impression. He is essentially living out of a dilapidated cave and has lost touch with the world. And then it starts raining toads. And that is just the start of the weirdness.Harry faces off against warring Faerie courts, shady wizards, a ghoul and possibly his biggest obstacle to date. His own goddamned stubborn nature. He is a man obsessed. He is a man possessed. He is a man on the fringes of his own sanity and he doesn’t even realise it until it is forced upon him to do so. And it is moving, undeniably so. I have always found Harry Dresden to be a hugely relatable character. He is freakishly tall, so am I. He gets looks where ever he goes, so do I. People always expect the worst from him… Look I can relate too all of that, except the magic. That I don’t have lol. And the writing makes this even more effective. It is littered with pseudo-wisdom, pop-psychology and nods to nerd humour. It draws me, as the reader, deeper into the narrative. And because of that it makes all of the characters all the more relatable and this in turn adds a depth to the writing that, whilst not everyone will get, will draw in people with that taste like a moth to a flame. I do recommend this book, hell I recommend this entire series to people who want an exceptional Urban Fantasy experience. It will make you laugh, it might make you cry and it might possibly make you think about things. I know it did for me when I first read it, and it still does to this day. But hey, that’s just me. I’m weird and sensitive. But if you do go looking into this series… Beware of faeries. Happy Reading. Archer.
Tweet