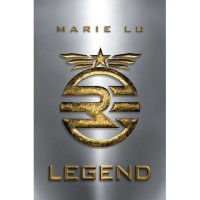 Holy crapsicles Batman!I went into this book torn. I had read that it was written in first person present *Shudder* and it hopped between the heads of the two main characters *cringe*. And because of that I put off reading this dystopian yarn for the longest time. And honestly, that was my mistake. I shouldn’t have hmm’d and ha’d over this one. I enjoyed this book and I am not ashamed to say that. This is a masterclass in how to make First Person Present tense work. I didn’t feel detached. I felt like I was right their with our MC’s in this dystopian regime. And that leads me to another thing that I usually don’t like but this time it actually worked. That’s right I was treated to bouncing around between heads again. Except that this time it actually added to the depth of the narrative and the tone of the novel.And y’see, the reason why it worked is this… We have two main characters that are the yin to each others yang… the dark to the others light… they are polar opposites. One being a criminal, well no, not a criminal, the criminal. And the other being everything that our futuristic Robin Hood fights against. But first a little back story about things… This story is set in the LA of the future, and the United States is not what we know. It’s not one big country, but rather it is two factions. The Republic and the Colonies… Welcome to the Ununited States of America. Now we are injected into this world with pretty much no backstory as to what caused this rift, we just know that there is a plague and that the Colonies are the enemy… or are they? The tale begins with Day, our young hoodlum out to cause chaos, watching his family to make sure that they are safe, when the predictable happens… one of them is infected. CUE MIND JUMP!We land in the head of June, a 15 year old prodigy in a military academy getting a bollocking for being awesome, typical isn’t it? Schools want you to excel but they don’t want you to be awesome… Dafuq? We meet her brother and her brothers subordinate… all is well... ish.CUE MIND JUMP!Day and Chummy McSecondary character are casing a job… And this is where it started to get interesting. As we know from the blurb Day is accused of Killing June’s brother, but did he? We know that the Republic care for their populace, but do they? The tone of the story from Day’s POV is very much that of a teenage boy, it’s very relatable and for that Ms Lu, I applaud you. Your understanding of the mindset of a teenaged male is astounding. But the tone shifts and changes with June. It’s much more calculating and clinical. She is more observant, if not as agile. She is a methodical genius. She’s the perfect daughter of the Republic. But then June makes discoveries from instinct and cues from Day. The story grows deeper, the narrative becomes, well in my opinion, richer. There is violence in this book but it is necessary violence. And unlike other books in this tense *CoughHungerGamesCough* it’s fast and brutal and actually happens on the page. We are moved along in a compelling tale of justice and the uncovery of truths and I can’t help but think that this is quite possibly the best YA dystopian that I have read. I did want more from this book though. More what, I can’t tell you because I don’t know but I just wanted… More of it. I can’t wait for the sequel and will be waiting with bated breath until I can get my hands on it. So I guess I have to eat my hat, because I once said that Dystopians are overdone and never work in YA.I stand corrected.Happy Reading,Archer.
Tweet