The Sword and The Prophet (Syren, #1) 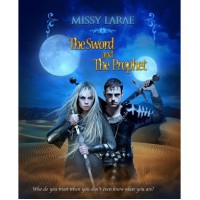 DNFReview to comeWell, hello there!This book, was very much, a tale that showed a lot of promise. It started out as a very well crafted story about two children, with possible extra sensory perception, who were running away from an abusive mother… and then after a fair chunk of text, and no warning… BOOM FUCKING ALIENS EVERYWHERE! (And they weren’t just aliens… they were aliens who looked human until they lost their temper or “bathed” in the moonlight. OK so they’re vampires? No, definitely aliens. But they have fangs and shit… No they’re aliens. OK then…)I was left scratching my head going “whuuuuuuuut? Where did that come from?” I mean I knew from talking to the author that that would happen but I had expected some foreshadowing. But having said that, the writing wasn’t bad. It was written in a Southern American accent pretty much phonetically and to be honest, it was jarring but forgivable.The plot moved along at a good clip and when I was reading it I powered through huge blocks of this book at a time. But it wasn’t gripping. When I put it down, I really had no inclination to go back to it… Right up until I DNF’d at 61% through the book. And this was one book I really wanted to finish but I just couldn’t. Some of the writing was so good I just wanted to worship Missy… But then there were some things that just made me headdesk.A single planet with 4 hemispheres… when a hemisphere is half a shphere. The 4 races of the alien planet being distant cousins to humans, just smacked of something not quite thought through quite enough. D’you know what I mean? It’s one of the most cliché ways to set up a race that looks human… for the most part. But come on, let’s be honest, Stargate killed that premise when they did it to death.But aside from that… The characters are OK. I can almost relate to them. To their feelings of isolation and desperation. Ok so I’m lying, I felt nothing for the kids. I felt nothing for their prison warden. I felt nothing for anyone in the book. I just couldn’t connect. I felt detached from everything and the flitting between headspaces didn’t help.Don’t get me wrong I can understand it for the story progression on the other side of the galaxy but with the twins and the randoms they encounter… It slowed the pace for me and stopped me forming an attachment. And try as I might, and believe me I tried, I just couldn’t make this book work for me. Which is disappointing because the premise of it sounded great. The synopsis had me. The tone, if not the choice of writing, had me. And the intro got me hooked. And then it descended. I didn’t dislike this book, but I couldn’t finish it. It was far too scattered, and it seemed not quite sure what it wanted to be for the longest time. And I just feel completely and totally...I’m not going to say to people steer clear because, as with all books, there will be people who can gel with it when I can’t. But I don’t know if I’d go out of my way to recommend it. And I suppose that that is the problem. It's all very, very forgettable. It’s sits very distinctly in that grey area between good and bad. That level of purgatory that no one ever wants to see a book fall into. And for that I feel bad.Happy ReadingArcher
Tweet