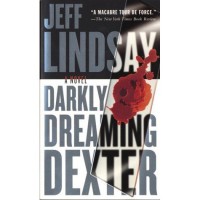 Re-read for a single book review. 4.5 starsOK. I burned through this book. I know I did. But there are reasons. Reason the first: Dexter is probably my favourite anti-hero ever. I can't help but love the character. Reason the second: The pace is of a nature that you find yourself being propelled along without even realising you've read more than half the book. Reason the third: Well... Purely and simply... BECAUSE I FUCKING CAN!Now as most of you are no doubt aware Dex has been given his very own hit show on the Showtime network. But hear you me, that is an entirely different beast After Season 1 (which is pretty much this book) Dexters world changes significantly. One of the big changes is that Lieutenant LaGuerta doesn’t die in the TV show and in the books Dexter’s brother doesn’t die dramatically at the hands of darkly demented Dexter, he disappears. . And to enjoy this book fully, if you've seen it, I would highly recommend purging it from your memory. In this book we are introduced to the titular sociopath. And straight off we are drawn deep into the under belly of Miami. The dark side of the pastel paradise. We are propelled along through Dexter as he starts off as the methodical almost robotic monster that he is, and then as the book goes on we live through the growth that he undertakes as he starts to feel. Whod've thunk it? A serial killer who beging to feel? What wonders never cease?I first read this book about 3 or 4 years ago and fell in love with the series as a whole. And the only reason that I give it less than 5 stars is that it's over too quickly. The progression of the story is a little too fast but I know that making it any longer would pet off a lot of readers. All I really have to say is that if you are looking for a dark comedy, with good pacing and a genuine catch the killer thriller feel about it then Dexter is the vigilante for you. I highly recommend this is you want a fast read that will keep you chuckling at little observations about humanity as a whole and will leave intrigued about where this is going to go next. Check it out. Happy Reading GRArcher.
Tweet