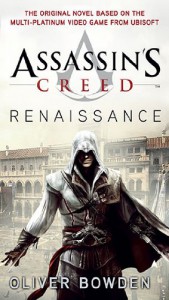 Well, once again, hello dear readersToday I am going to be venting my frustrations about one Oliver Bowden (real name Anton Gill, this author, in my opinion, deserves to be named and… well, we’ll get to what else he deserves later) and his adaptations of the Assassin’s Creed story.Now let me just go on record and say, I read these books out of order. I read The Secret Crusade first (hey when a book is sold as the retelling of the events that spawned the series you’d naturally assume that that should be read first) and now I’m reading Brotherhood. But let me just say this for the books… They make an amazing tale mediocre. Structurally, for the most part, there isn’t all that much wrong with the writing, it’s just dry, lacklustre, dull.Now I’m not a published author or anything but I’ve researched this writer, he has 27 years experience in the writing game, and as such there is no excuse for the errors that Gill (No, sir, with respect I will not allow you to hide behind a pseudonym, you don’t deserve the honour) is frequently making; mispunctuated text, broken flow, poor desriptive text, dry narrative. Honestly I am surprised he has had so many books published.So as I am a fan of the already successful AssCreed franchise, as many of my readers are no doubt aware, I find myself frustrated to the point of it being a chore to read these books because so very much is wrong with them. Now I know Ubisoft are commisioning them to make the story accessible to people other than gamers, and they should because the story is fucking kick ass, but honestly, they could at least find a better author, maybe an author that has actually understood the story line and the details of the tale, that could be an idea couldn’t it Ubi? Anton Gill, whilst claiming to be a renaissance historian, is making blinding historical innaccuracies in his text, innacuracies that are simply the work of a sloppy writer who has not researched the time period properly.Now the historical errors I can let slide because no doubt he had a time frame to get the book out in, BUT, I cannot forgive the detail innacuracies of the characters. The big one being the Hidden Blade. In the original telling of the tale, i.e. the game, the original hidden blade Ezio is left by his father, is worn on the left hand. This is because the mechanism originally required the sacrifice of the ring finger because the bearer would be married to the Brotherhood of Assassin’s. So why did Gill put it on the right hand? This is wrong.However, there were a few little snippets of Ezio’s life that were in the book that were not mentioned in Assassin’s Creed 2. These were memories of his first love, Christina. I think that these gave the character of Ezio a depth and very human storyline that has been missing from a lot of big franchise protagonists for many years. And obviously Ubisoft agreed because they actually included these little snippets as playable memories in the Brotherhood game to allow Ezio to remember Christina and to let the gamer more fully understand everything that he gave up to carry on his father’s work of hunting down Templars and protecting the masses from their malevolent schemes.I know this sounds mostly like me being petty and picking for the sake of it, but these are the problems with the book that take an awesome concept the should work well as a novel and make it average at best. I have no doubts at all that if another author could have taken a stab at the tale then these books could have been better. Hell if Ubi had found a fan of the series that was also a writer and had told them “make it as awesome in text as it is on screen” then these adaptations would be best sellers in their own rights. But as it stands, these are books that die-hard fans should stay away from like they would the plague. They are better suited to teens whose parents won’t let them play the games, but are still interested in the franchise.But to anyone who reads these books, don’t expect the sort of quality writing you get from authors like J.K., Butcher, Pullman or Nix. These books read as if they didn’t have enough polishing done and were put out ahead of schedule and have as such suffered.Happy reading and don’t be another blade in the crowdArcherSpread the word!!
Tweet